Propolis for skin diseases and inflammation 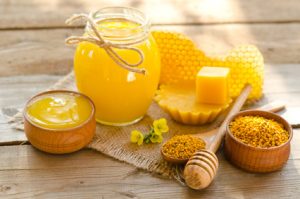 What Propolis is able to do against skin diseases has already been reported. There is already a proprietary, propolis-based tonic against acne, blemished skin and sebum problems. A serious problem is a psoriasis. Some psoriasis responds well to the treatment with Propolissalbe, others not at all. Fang Chu has given propolis 160 psoriatics internally, or oral, 0.3 grams three times a day for three months. He reports: “37 patients were completely healed, the condition of 17 improved, 58 had no change, and 48 cases worsened. In subsequent tests, it was found that propolis had no deterioration effect. “This must be added because otherwise, it might give the impression that in some cases of psoriatis perhaps propolis could have a negative effect. That’s not the case. Without propolis, there would probably have been more deterioration. Dermatologists know that psoriasis should behave diet-wise (no alcohol, no nicotine, little protein, and if so, then only the highest).

Psoriasis is often associated with arthritis, rheumatic and liver complaints. Since the positive effects of propolis, pollen and royal jelly on the blood, the liver and the health of the most important RES (reticuloendothelial system) is proven, it is also recommended to take drops, three times a day five drops in half glass of water, preferably before meals. By the way, hepatitis (also serum hepatitis A and B), so liver inflammation, jaundice (Ikarus) and other liver complaints you can confidently treat with propolis. Often, this will not make intervention by the doctor unnecessary but will help with support.

– Propolis heals hemorrhoids. One area of ​​concern for many practising sedentary occupations is the liver and portal vein. Nobody likes to talk about hemorrhoids, and nobody really wants them. Again, Propolis is right. In the Alps, in Russia, in France and in the forests of the north, the tradition of preparing hemorrhoidal ointments from the resin of many trees has been preserved: spruce, fir, larch, birch. Such resin ointments are reliable helpers when the pain is unbearable.

– Propolissalbe works the same way, if not better. You should also introduce them if necessary. In addition, consider that the intestine loves the moist environment; Frequent washing, necessarily after a bowel movement, benefits almost as well. Bloating foods and alcohol are to be avoided. The surgery of peripatetic abscesses, hemorrhoids and anal fistulas has been very successful with propolis dissolved in castor oil. Eighty-seven percent of newcomers reported that ten minutes after treatment with this castor-propolis oil, the pain disappeared or decreased significantly. At the clinic of these surgeons (which was not informed), this form of wound treatment has been practised for twenty years.