Does the marigold have a healing effect?

The marigold (Latin: Calendula officinalis) from the daisy family (Asteraceae) probably comes from the North African Atlas Mountains. In Central Europe it has been cultivated as a medicinal plant since the 12th century. 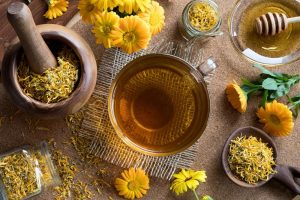 The yellow and orange blooming, annual plant forms claw-shaped seeds. For this reason Hildegard von Bingen, who used the marigold as a medicinal plant and cultivated it in the monastery garden, christened this “ringula”.

Because of its orange, radiating flowers, it is also affectionately called “Dawn” or “Gold Flower”. With their sunny, small flowers, marigolds are a real ornament in any garden – and are easy to pull and harvest.

But the little plants can do even more: they are one of the most effective medicinal plants we know; have a healing effect on a whole range of ailments. In 2009 the marigold was even named “Medicinal Plant of the Year”.

The species Calendula officinalis or Calendula arvensis are suitable for medicinal purposes, the petals of which are dried immediately after flowering. The flowers also decorate salads; they are edible and extremely healthy. Press juices from the leaves, however, hardly play a role.

The main active ingredients of the marigold

The strictly scented essential oils of the marigold are of no medical importance. Only the flowers are used for medicinal use.

Effect of the marigold

Already in the Middle Ages, the healing effects of calendula were known for indigestion and inflammation. In the monastery medicine of that time, marigold ointments and lard were considered the most important anti-inflammatory remedies.

This effect was confirmed in 1986 by Commission E of the former Federal Health Office. Today the marigold is one of the most important medicinal herbs that can be used widely and are also scientifically recognized.

Officially recognized is B. their effect on inflammation of the skin and mucous membranes as well as light bites, bruises and burns. Calendula should not be missing in any medicine cabinet!

Undisputed when it comes to wound healing

Basically, the marigold ensures rapid wound healing, for which it is mainly used due to its germicidal and anti-inflammatory properties. In addition, the marigold works in the following way. She:

is generally cleaning and decongestant,
has an antibacterial effect and inhibits viruses and fungi,
also promotes wound closure and the growth of new cells,
relieves pain and relieves cramps
and increases local blood flow.

Furthermore, the flowers of the marigold affect the human organism

And it also helps

But that’s still not enough; it is also used today for these problems:

It should also not be neglected that the calendula, with its estrogen-like properties, benefits the female reproductive system. Applied internally, it helps with:

According to a report by the PTA-Forum magazine for pharmaceutical technical assistants in 2006, a marigold / petroleum jelly mixture was found to be more effective in preventing radiation damage to the skin than conventional medical therapy with trolamine gel. 254 breast cancer patients took part in the examination during radiation therapy.

The folk medical use of calendula tea to lower blood sugar and lipid levels, however, could not confirm modern investigation methods. So far, pharmacological research has also found no clear evidence of effectiveness in gastrointestinal ulcers and cancer.

Caution: Adverse effects of the marigold are not known. However, allergic reactions to allergies to daisies or people with sensitive skin cannot be excluded. These can manifest themselves, for example, by reddening, burning or itching.

Use of the marigold

Marigold flowers have a healing effect on a whole range of ailments.

Today, the dried petals or tongue petals are used in the pharmaceutical sector, for example to produce marigold teas, tinctures, extracts, creams or ointments for internal or external use. Components of the plant are stuck as dye. B. also in cheese or butter.

Areas of application and effect

Marigold ointment (or calendula ointment) from the pharmacy helps you with poorly healing abrasions, cuts and burns. It has proven itself in infant care and against bedsores and with open legs (leg ulcers). It can be used for scar growths, inflammation in the area of ​​fingernails and toenails, inflamed nipples and eczema.
When drunk as a tea, the marigold works for irregular cycles, for regular stomach ache, premenstrual breast complaints and for menopausal symptoms.
Tea and ointment help you with skin inflammation, cracked and irritated skin, with poorly healing wounds and sprains.
A tea compress is good for breasts while breastfeeding, as well as irritated and tired eyes.
Sitz bath or rinsing are helpful for healing wounds in the genital and anal area.
In homeopathy, the medicinal plant is used to treat wounds. It is particularly useful for wounds that could fester because it prevents further infections.

Calendula should not be used internally during pregnancy as this can cause contractions. Allergic reactions occur very rarely. Otherwise, side effects of marigolds are not known.

The marigold is mainly used for external use because it has an anti-inflammatory effect and promotes the rapid healing of wounds.

Marigold ointment is traditionally recommended because it has a healing effect on a large number of skin injuries such as bruises, sprains or bruises. Calendula is considered a top remedy for problematic wounds, cuts and abrasions.

It is an antiseptic remedy even for poorly healing wounds, skin infections and ulcers. Even a crushed flower on a small wound – such as a mosquito bite – should stop the bleeding and reduce swelling.

So the marigold ointment can help with:

Fresh marigold petals can even fight warts if you put them on crushed. Applied to poorly healing or fresh wounds, marigold blossoms quickly become effective when dried.

Marigold tincture, used as an envelope or rubbing in, also has a healing effect. Marigold shampoos and bath products are a real treat for sensitive skin and irritated scalp.

Marigold tea strengthens digestive organs such as the liver or bile and can alleviate acute nausea. In addition, it has a slightly laxative effect and can also help stomach ulcers heal.
Symptoms such as headaches, difficulty falling asleep or dizziness can also be alleviated by drinking marigold tea.
The tea has an antispasmodic effect, so that it can serve well for menstrual cramps. As already mentioned, its estrogen-like active ingredients can also help menopause in the menopause.
If there is inflammation in the mouth and throat, marigold tea can also be used for gargling or rinsing.