Why does Bulgarian honey have healing properties?

Honey has become a landmark in Bulgaria for the past decade and can be found at all international exhibitions alongside the famous Bulgarian yogurt, rose oil and wine. The
Honey produced in Bulgaria has excellent taste and healing properties and therefore has a good market in Europe. Its quality is so high that importers use it to improve the honey commodity in their countries. That’s one of the reasons why you c 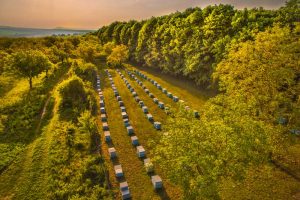 an not find it in the stalls under the name “Honey from Bulgaria”. To try this healing elixir, you have to buy it directly from Bulgarian beekeepers. As a bonus, you get a honey that – although not officially considered “organic” – is practically a bioproduct, because the bees collect their honey from us on the flower meadows of the wild nature.

Beekeeping is largely a national sport in Bulgaria and much of this thick amber liquid is produced by laymen in a few to a few dozen beehives. Almost every family in the country produces honey for their own use, as is the case with wine or schnapps. The development of this industry and the extraordinary quality of the product form the basis of the project of the Professional Beekeeping Association from last year to popularize the Bulgarian honey in Bulgaria and in Europe. The coordinator of the project is Daniela Sabewa, who does not save on superlatives when talking about the healing effects of bee products, which are still not well known to the general public.

Within the framework of the project, the market and the habits of consumption of bee products were studied at home and in Europe as a whole. According to the study, there is still a weak but persistent tendency for honey consumption in Bulgaria. But compared to Germany e.g. we have 20 times lower honey consumption per capita. There is another difference. While the majority of people in Europe consume the so-called polyphorhonig, which comes from different plants, we mainly eat varieties of honey that feed on individual plant species, such as acacia or linden trees. That’s because honey types that are considered a specialty product elsewhere are produced in large quantities. Among the numerous Bulgarian honey species is especially popular made of donkey thistle, which is intended to increase male potency.

This wealth of monoflor honey alongside the Polyflor honey is another rare specialty of beekeeping in Bulgaria. Another important feature of our country is the production of all other bee products – royal jelly, bee bread, propolis, bee venom and beeswax. The honey professionals are particularly pleased with the fact that Bulgarians are learning to use bee bread more and more, thus creating a market for themselves.

“Bulgaria is a serious producer of bee bread, but it is completely sold in the domestic market,” says Chairman of the Association of Bulgarian professional beekeepers Efrem Mollow. “We have achieved something that can not be seen in other European countries that people recognize the beneficial properties of this bee product and are constantly increasing its consumption.We are the only country in Europe that has built such a single market for a bee product – to develop a large production and consume it entirely in the country. that’s the way and I want to apply it to the other bee products as well. ”

As far as honey production in Bulgaria is concerned, there will always be quantities for export, say the experts. All the more so as he is particularly in demand on the European market, because of its high quality, which exceeds the requirements of the standard for mass honey in the Community. The most appreciated Bulgarian honey is Germany, followed by France, Spain and England. Together they make up 60% of the market for honey and bee products in Europe.

“Germany buys bee honey mainly from Bulgaria, where two-thirds of our exports go,” says Efrem Mollow. “Unfortunately, this honey does not come under the brand” Produced in Bulgaria “or under a Bulgarian trademark in the German market, but is used to improve the honey imported from other countries. This is a niche we want to take from the beekeeping community. But we must join forces to form a powerful organization of Bulgarian beekeepers, who can create a name for Bulgarian honey and our bee products and establish them in Europe. So that Europe does not just buy our good honey to improve the honey sold on the retail network. ”

Europe imports honey from some Latin American countries such as Argentina, Mexico and Chile. According to industry professionals, Bulgaria has the opportunity to capture this niche because of its low transport costs and higher product quality. Our country usually produces around 5,000 to 6,000 tons of honey every year, especially for Europe at an import price of 4 to 5 euros per kilo. Interest in this Bulgarian elixir has recently risen in countries like Qatar, which are a very interesting market because of higher honey prices.

And finally, we should name a unique Bulgarian bee product – a blend of four bee products – honey, royal jelly, bee bread and propolis. “It’s a unique product, because so far only we here in Bulgaria have managed to unify the four bee products,” claims Efrem Mollow. “A spoonful of this magical mix in the morning allows the organism to absorb many of the beneficial things from the bee products it needs for the day. Other states have taken that from us and we know that beekeepers in Greece, Turkey and Russia are trying to create this unique product but have not been successful so far. ”